With the largest economy in the world, the United States of America offers some of the best possible business opportunities. Founded on the principles of equality, the US is rich in cultural diversity. This - alongside a hardworking, dedicated and well educated workforce - position it well as a location in which businesses of any size can thrive.

This guide is an accurate reflection of the pre-Covid-19 business environment in the USA. Please note that due to the current situation, some circumstances may have changed in this country. Figures and data in the guide were last updated in May 2021.

Welcome to the US

A vast country, spanning six timezones, the US is a world leader in invention, innovation and inspiration. The free enterprise system means all businesses can compete on a level playing field in the US, which is why so many international organisations choose to locate here.

Evolving from a primarily agricultural economy in the 19th Century to a highly industrialized one for most of the 20th Century, today it proudly boasts one that is increasingly service-based.

HSBC Bank USA, N.A. has been connecting Americans to global opportunities since 1865. One of the largest banking and financial services organisations in the world, we service customers from offices and branches across the US, including New York, Los Angeles, Chicago, Atlanta, Houston, Seattle, Miami, San Francisco, and Washington DC.

Our team is on hand to help you navigate this vast land and make the most of the potential that the US has to offer.

Please get in touch today to find out how HSBC can support you and your business. 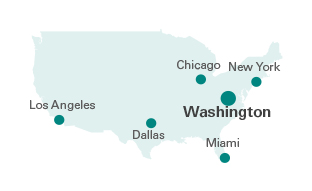 * Map shows cities of economic significance according to the CIA, 2019

A highly competitive and technologically advanced nation, the US’s economic, political and cultural clout is felt worldwide. Bold and brash it may be, but it’s certainly a place in which to do business.

Boasting by far the largest economy in the world, the size and scale of the US is like no other. Its GDP compares to that of entire continents.

The United States of America (USA), also known as the US or America, is a federal republic comprising 50 states, a federal district, five self-governing territories and various possessions.

The US today is a diverse society, shaped by large waves of immigration from Europe and beyond. As the world’s third-largest country, coast to coast the country spans almost 3,000 miles.

There’s New York on the Eastern Seaboard, the ‘city that never sleeps’, while Los Angeles to the West is home to all the glitz and glamour of the Hollywood movie industry. And there’s plenty more in between; from the ‘Windy City’ of Chicago in the North, through the country’s heartlands to NASA’s ‘Space City’ of Houston in the Deep South.

The US offers a massive market of consumers to tap into. And while the country has been making even more headlines than usual during these politically and economically transformative times, global business continues to view the US as the go-to destination for both investment and growth.

Read on to discover more about the dos and don’ts of doing business in the US. Also find out how trading in or with the country could help boost the future growth of your business.

5 reasons to do business in the US1