India is a rising economic powerhouse, already the world's largest democracy and set to become the world's third-largest economy by 2030. With a population of well over a billion and a growing middle class, consumer-driven consumption is strong and opportunities abound. India also boasts one of the world's largest expat population, with 18 million non-resident Indians.

This guide is an accurate reflection of the pre-Covid-19 business environment in India. Please note that due to the current situation, some circumstances may have changed in this country. Figures and data in the guide were last updated in May 2021.

The Indian government has also demonstrated its commitment to modernising the economy. The Production-Linked Incentive (PLI) schemes, tax rationalization initiatives such as GST, and reduction in Corporate Tax rates are just a few examples of the reforms designed to make it easier to do business in the country.

Several key industries are experiencing growth - opportunities are particularly strong in areas such as electronics, logistics and warehousing, chemicals and renewables. Additionally, there is a massive momentum in enablement of tech - 50 unicorns and 12,500 startups. As India begins its recovery from the global pandemic, there are many reasons for optimism. With its natural advantages and a government keen to attract foreign investment, India continues to be an attractive location to do business.

HSBC has long understood the advantages of India as a business location, and our origins in the country date back to 1853 when the Mercantile Bank of India was established in Mumbai. Since then, the bank has grown steadily and been active in the development of the Indian banking industry - even installing the first ATM in the country in 1987. Today, we oer a range of products and solutions to help support local and international companies in the country to fulfil their ambitions. For India, and for businesses leveraging the country's resources, the future is bright.

We look forward to welcoming you. 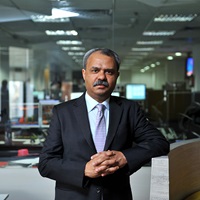 India: The eye of the tiger

Life – and indeed business – in India is an adventure like no other. The country is a diverse republic that never ceases to surprise and delight. It is also home to one of the oldest civilisations on earth, and boasts a unique fusion of traditions from the East and the West.

Sitting close to major trade routes, the country has a history built around trade and making the most of its resources. However, only in the last 25 years has the country pushed through economic reforms that have truly opened it up to the global economy.

Throughout its merchant history, India has introduced a number of popular products to the world, including: Darjeeling tea, Indian khadi cotton, Bombay Duck, Kashmiri carpets, Indian spices and dried fruit.

India’s market has continued to strengthen and expand. What’s more, public finances remain stable – as does the government headed up by Prime Minister Narendra Modi. As well as having a roaring economy, India is also recognised for its fiercely competitive education system. In fact, it has produced some of the foremost scientists and technicians of our time. The number of skilled professionals, including engineers and technicians, who are fluent in English also makes the country an attractive market for doing international business.

On the regulatory side, India also offers a very competitive tax regime and a robust and efficient legal and judicial system. The country benefits from a well-regulated financial system that offers a broad range of services. Businesses operating in the country can also tap into its developed capital markets as an alternative source of financing, which is comforting.

Since India’s economy is incredibly diverse, comprising traditional village farming, modern agriculture, handicrafts, a wide range of modern industries and a multitude of services – there are also opportunities for any type of business to succeed.

Read on to discover more about the dos and don’ts of doing business in India. Also find out how trading in or with the country could help boost the future growth of your business.

India’s market has continued to strengthen and expand. What’s more, public finances remain stable – as does the government headed up by Prime Minister Narendra Modi.

5 reasons to do business in India1

All indices represent the latest 2017/18 rankings