Tighter capital controls in 2017 slowed the progress of renminbi internationalisation, as China’s outward investment dipped. In the next few years, policy support for a recovery in external economic activity will be biased in favour of Belt and Road Initiative (BRI) countries, driving demand for cross-border renminbi services. As China becomes more important as a trade and investment partner to BRI economies, the benefits to the latter of using the renminbi for loans and trade settlements will grow. Measures such as bilateral currency swaps and the establishment of more convenient platforms and services for transacting in renminbi are laying the groundwork for more widespread use of this currency.

China’s efforts to expand the international use of the renminbi have stalled in the past two years, following a high-water mark in 2015. In October 2015, global payments platform SWIFT announced that the renminbi had overtaken the Japanese yen as the fourth global currency by value of payments, accounting for 2.79 per cent of the total. Speaking to the Economist Intelligence Unit around the same time, a senior official from the People’s Bank of China claimed that in the first half of 2015, over a quarter of China’s trade by volume had been settled in renminbi, up from 1 per cent six years before.1 But by the time the International Monetary Fund (IMF) granted the renminbi Special Drawing Rights (SDR) status in September 2016, giving it the status of an international reserve currency, it was already in retreat.

By the start of 2018, the renminbi’s share of global payments had dropped to 1.61 per cent, putting it in fifth place as a global currency; and the share of China’s trade settled in renminbi had fallen to 11.5 per cent. What happened? And could the BRI help China to rebuild momentum for renminbi internationalisation?

Two connected factors combined to limit international use of the renminbi in 2016-17. The first was renminbi depreciation. A market consensus that the renminbi was set to weaken emerged, deterring uptake and accelerating the depreciation. The renminbi fell 6.6 per cent against the US dollar during 2017, its largest annual drop since 1994. The second factor was the introduction of tighter controls on cross-border capital flows by the Chinese government, in an effort to prevent the decline of the renminbi and slow capital flight. Capital outflows had accelerated during the second half of 2016, owing to downward pressure on the renminbi’s exchange rate and expectations of monetary tightening in the US. The government responded with measures including a tighter cap on offshore lending by Chinese banks and increased scrutiny of overseas investments by Chinese firms. This led to a reduction in outbound direct investment in 2017, which is an important driver of renminbi internationalisation.

Renminbi use in BRI countries: bucking the trend?

The pace of renminbi internationalisation is likely to pick up in BRI countries in the medium term, particularly in the regions closest to China. BRI countries in Asia have some immunity to the headwinds to renminbi internationalisation discussed above. First, China’s policy focus on BRI trade and investment will help to ensure that the central authorities scrutinising outward investments look more favourably on projects presented under the initiative. The Economist Intelligence Unit expects China’s outbound investment to rise again in 2018-20 (see chart), and the policy banks and China-led multilateral financial institutions supporting this investment have been tasked with ensuring that funds are channelled to support key BRI projects. 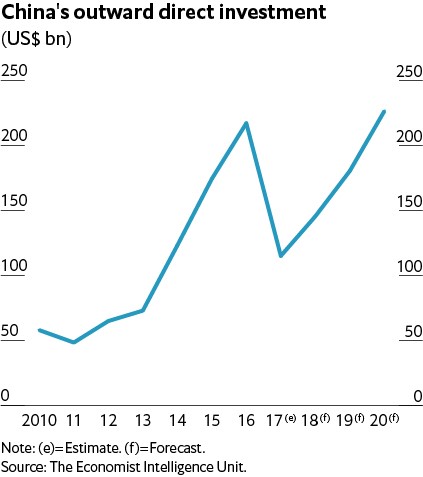 Second, as a result of China’s central role in Asian regional trade, many emerging-market currencies in the region have started to track the renminbi more closely than the US dollar, with governments reluctant to allow their currencies to appreciate significantly against the renminbi. This has reduced the risk perception of loans and trade settlements in renminbi compared with those in the dollar, particularly given the highly-volatile history of exchange rates between emerging-market currencies and the dollar.

For countries with a high proportion of trade with China – which will increasingly be the case for BRI countries – it makes sense to use the renminbi. As well as potentially lowering exchange rate risk, China’s central and state-owned banks have been putting in place the infrastructure to reduce the cost and difficulty of cross-border renminbi transactions.

China negotiated 36 bilateral currency swap agreements between 2008 and the end of 2016.2 These prepared the groundwork for local and Chinese banks to offer loans and cross-border transactional services in the currency, reducing costs and currency risk for firms engaged in bilateral trade. Such agreements can also improve access to capital. This was a consideration for Egypt when it signed a currency swap with China in 2016, amid a dollar shortage and fears of dollar appreciation against the local currency. A study covering the 2000-16 period (funded by China Development Research Foundation) found that the presence of currency swap agreements with China was correlated with increases in bilateral trade of nearly a third.3 The increase was even greater for BRI countries. The improved ease of trade is likely to be just one of several factors, including improvements in bilateral diplomatic relations when a partner government helps Beijing to progress its policy goal of renminbi internationalisation.

Pakistan offers a textbook example of how China and BRI partner countries can advance cooperation over renminbi use. China and Pakistan signed a bilateral free trade agreement in 2007 and Pakistan’s imports from China grew rapidly over the following decade. As trade links between the economies grew, their central banks agreed on currency swaps in 2012 and again in 2017. By this time, the China-Pakistan Economic Corridor had become an important component of the BRI, and infrastructure projects were increasingly driving demand for imports from China. In January 2018, State Bank of Pakistan, the central bank, approved use of the renminbi for bilateral trade and investment. The central bank can now provide renminbi for onwards lending by other Pakistan-based banks to firms engaged in trade with China. The Industrial and Commercial Bank of China (ICBC), one of China’s “Big Four” state-owned commercial banks, has set up a renminbi settlement and clearing operation in Pakistan.

The financial infrastructure for cross-border renminbi transactions and offshore clearing is making progress, helped along by government pressure in all quarters to facilitate the BRI. In June 2017, the People’s Bank of China announced the second phase of the Cross-border Interbank Payment System (CIPS). Launched in late-2015, the CIPS aims to streamline and speed up clearing and settlement. China’s efforts to this end are being supported by global financial cities keen to establish themselves as leading offshore renminbi centres. Singapore announced a deepening of financial market cooperation with China in mid-2017, with a view to playing a greater role in financing the BRI—a role currently dominated by Hong Kong. China’s state banks are expanding their foothold along the BRI routes, while major banks from elsewhere in the world are also looking to increase their capacity to provide renminbi services to BRI projects.

As in non-BRI countries, obstacles to the development of markets for renminbi-denominated financial services in BRI countries remain. China retains a relatively closed capital account and an underdeveloped domestic financial market, meaning that holders of overseas renminbi have limited channels for reinvesting the funds back into China’s domestic market, and costs associated with the process are higher. Consequently, while the use of the renminbi will probably increase more rapidly in BRI countries than elsewhere in coming years, it is not likely to rival key international currencies such as the US dollar or the euro until China substantively opens its capital markets.