Shades of green: the potential for low-carbon energy in the BRI

Written by The Economist Intelligence Group on behalf of HSBC

China-based firms and investors are well-positioned to take green energy technologies to developing countries on the Belt and Road Initiative (BRI) routes. But in line with demand from BRI countries themselves, China-invested power projects to date have been dominated by coal and large-scale hydropower—the latter arguably the least “green” of the low-carbon energy options. In future, heightened awareness of social, environmental and international political risks among Chinese financial institutions may help to drive a shift to “greener” renewables. China’s state-owned grid corporations have ambitions to provide regionally-connected smart grids which could facilitate a transition to a distributed and largely renewable energy system in Asia and beyond.

Green tech is “going out”

As the Copenhagen climate change conference (COP15) fell into disarray in 2009, the prevailing mood of pessimism was influenced not just by lacklustre US commitment to reducing emissions, but also by the oft-cited fact that China was building a new coal power station nearly every week. China offers some reasons to be hopeful. It leads the world in renewable energy investment, and its firms are now well-positioned to accelerate the energy transition in BRI countries.

Chinese government support for the renewable energy and low-emissions sectors (including solar, wind, hydropower, nuclear, and related technologies such as batteries) has risen due to a shift in focus from the quantity to quality of growth. By the start of the 13th Five Year Plan (2016-20), China’s domestic investments in renewable energy and low-emissions sectors exceeded US$100bn annually—more than double the US level of investment. China’s foreign investment in large-scale renewables, new energy and network projects jumped 60% year-on-year to reach $32bn in 2016, according to the Institute for Energy Economics and Financial Analysis (IIEFA), a US-based think-tank. (This figure includes investments by China-based firms valued at $1bn or more, including mergers and acquisitions and construction contracts.)1 The figure jumped again to $44bn in 2017. 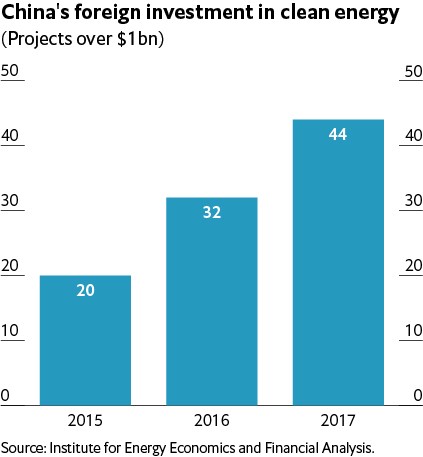 China’s clean energy investments to date have taken place all over the world, in both developing and advanced economies. They have been driven mainly by commercial considerations, such as access to technologies and markets. But with pressure being brought to bear by the Chinese government on policy banks and Chinese-led multilateral financial institutions to support BRI and to prioritise financing for sustainable development in general, Chinese investors are likely to be more focused on clean energy projects along the BRI routes going forward.

Power generation is a key focus of the BRI, although the starting point for a Chinese-led green transition is low. Coal still dominates BRI power projects in terms of generating capacity, while hydropower leads in terms of project numbers. However, the international community has become less enthused about large-scale hydropower, owing to the potentially catastrophic impact on local communities and ecosystems, and the consequent social unrest that such projects can cause. Political risk is a major hurdle for China in implementing the BRI, and hydropower—particularly when it affects trans-boundary rivers—can inflame sensitive international relations.

Why do the “least-green” forms of power generation still dominate? One reason is that, domestically, China has been discouraging coal power and encouraging wind and solar. This has led Chinese coal power firms to become more aggressive in seeking foreign business opportunities. But given that Chinese overseas investment is traditionally technology-agnostic, it largely comes down to domestic policy in the host countries and the prevailing view that coal and large-scale hydropower are the only realistic options for developing countries seeking rapid, large-scale increases in electricity supply. Looking at the top Asian recipients of Chinese power investments, only Pakistan has a relatively diverse pipeline featuring nuclear, hydropower, solar and wind. The Philippines, India and Vietnam, each with significant domestic coal reserves, are still focusing on new coal-fired power plants, while mountainous Laos is focusing on hydropower. Where Chinese involvement in coal power has been reduced, this can usually be traced to a domestic agenda—for instance, when India banned foreign participation in major thermal power projects in 2009.

Stronger financial risk assessment as a driver of change

The agnostic stance of Chinese banks and financial institutions is starting to change, as their (and the government’s) tolerance of financial losses linked to environmental, social and political risks diminishes. Investors are informed by events such as Myanmar’s suspension of the Myitsone Dam, a large hydropower project majority-owned by Chinese firms. The Chinese developer had sunk US$800m into preparations for the dam before protests led the government to shelve it indefinitely. Hydropower projects have also fallen through in Pakistan and Nepal.

The Chinese government has repeatedly signalled to state-owned banks and financial institutions that a more cautious and responsible approach to issuing credit is required, at home and abroad. In 2012, the China Banking and Regulatory Commission (CBRC) launched the Green Credit Guidelines, calling for banks to identify environmental and social risks and to grant credit only to those who will respect local laws. In 2016, the People’s Bank of China (the central bank), along with the Ministry of Finance and five other ministries, issued the Guidelines for Establishing the Green Financial System, calling for banks and financial institutions to strengthen environmental risk management of the BRI and other foreign investment projects. How much of an impact such guidelines are having on project-financing decisions in practice is unclear. It is likely that environmental concerns continue to carry significantly less weight than other political risk factors in assessing credit risk. Nonetheless, there are signs of change at some institutions.

As policy banks which are deeply involved with the BRI, Export-Import Bank of China and China Development Bank (CDB) are expected to set the standard. Both have adjusted their portfolios to direct a greater share of credit to low-carbon projects. They have also introduced more stringent assessments of social and environmental risks. These requirements are not yet as strict or transparent as those applied by the World Bank and International Finance Corporation (IFC), according to analysis by GEI, a Beijing-based think-tank,2 but the system is still evolving as experience of complex infrastructure projects in overseas markets grows.

To limit social, environmental and political risks, one approach advocated by many environmental NGOs is to develop a decentralised power-generation system, involving a larger number of smaller clean energy projects. This would require significant investment in upgrading power grids—an area in which China could play a crucial role in BRI regions. China’s state-owned grid operator, China State Grid, has ambitious plans. Along with other interested parties, it has established the Global Energy Interconnection Development and Cooperation Organization (GEIDCO), a Beijing-based international NGO. Headed up by former China State Grid chairman, Liu Zhenya, it aims to build regionally-connected smart grids which are not only fit for purpose in the transition to a distributed power generation system, but which facilitate cross-border energy trading.

This is not just talk. China State Grid and China Southern Power Grid, the other state operator, have already been involved in building cross-border power lines in North-east and South-east Asia respectively. A plan for a North-east Asian “supergrid”, which could connect areas with enormous potential for solar and wind power in Mongolia and northern China to South Korea and Japan, has won support from Softbank, a Japan-based telecommunications multinational, and KEPCO, South Korea’s state-owned energy group. Implementing transboundary smart grids will be no easy task across a continent as fraught with international tensions as Asia. Yet such initiatives have the potential to significantly ease tensions, if they can reduce the need for politically-sensitive power projects and address energy shortages.