Written by The Economist Intelligence Group on behalf of HSBC

China is developing a number of zones aimed at boosting cross-border e-commerce, making it easier for foreign small and medium-sized enterprises (SMEs) to access China’s large and rapidly-growing online consumer market. In the short-to-medium term, the benefits look set to accrue mainly to sellers in developed economies. But China’s e-commerce and related services providers are internationalising, and their expansion will help to build new linkages between emerging markets on the Belt and Road and China’s e-commerce zones.

China’s large and rapidly-expanding e-commerce market has the potential to be an important driver of SME growth along the Belt and Road Initiative (BRI) trade routes. Smaller firms, lacking the necessary scale, can find it hard to link into the global value chains of multinationals. E-commerce offers them an alternative—selling directly across borders to other businesses (B2B) or consumers (B2C). Given the key role that SMEs play in employment generation, particularly in developing countries, regional economic organisations such as APEC (Asia-Pacific Economic Cooperation) are keen to see e-commerce play a greater role in regional economic integration.

China has quickly established itself as a leading global e-commerce market. By 2016 it comprised nearly 40% of the global e-commerce market, with a total transaction value of Rmb5.16trn (around US$800bn) according to Ministry of Commerce figures. This makes it an appealing market for foreign firms, but when it comes to cross-border e-commerce, the main flow of goods is outwards (see chart). 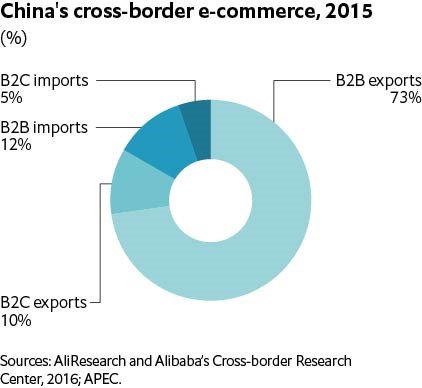 Inwards B2C sales occupy a small but rapidly-growing segment. In 2015, a year when China’s overall trade slumped, B2C imports via e-commerce increased by 92%, compared with 60% growth in B2C exports. Selling goods into China through online platforms is getting easier.

Since 2015, China has established 13 “cross-border e-commerce comprehensive pilot zones”, starting with Hangzhou and followed by Chengdu, Chongqing, Dalian, Guangzhou, Hefei, Ningbo, Qingdao, Shanghai, Shenzhen, Suzhou Tianjin and Zhengzhou. Similar to when special economic zones were appointed in the early years of reform and opening-up, the local governments in these areas are to develop supporting logistical and financial infrastructure, and test out new regulations.

China already has several very successful private-sector companies in e-commerce which are lobbying for freer cross-border trade and asserting themselves as key stakeholders in some pilot zones. The largest is Alibaba Group, which operates a number of domestic and cross-border platforms. Domestically, its Tmall platform has over half of the B2C market, and Tmall Global has enabled B2C imports into China since 2013. It is no coincidence that the first of the e-commerce pilot zones was located in Hangzhou, Alibaba’s home city.

Alibaba’s founder, Jack Ma, has lobbied for an “electronic world trade platform” (eWTP) to make it easier for SMEs to engage in cross-border trading. As the first step towards this eWTP, in 2017 Alibaba Group launched a digital free trade zone in Kuala Lumpur, in cooperation with the Malaysian state. It then signed an agreement with the government of Malaysia and the municipal government of Hangzhou to explore linkages between this new digital free trade zone and Hangzhou’s pilot e-commerce zone. This offers one model for future regional cooperation among BRI countries in developing and harmonising the logistical and financial infrastructure for e-commerce, albeit a model that would disproportionately benefit a few dominant platforms.

Private-sector involvement in China’s e-commerce zones is not limited to Chinese firms. The Hangzhou pilot zone’s authorities have signed an agreement with Google, and the Fujian zone has teamed up with eBay, a decade after the latter took down its online auction site in the country. These examples of foreign participation are mainly aimed at supporting the incubation of domestic e-commerce businesses, so may have more impact on Chinese exports than in helping foreign SMEs to access the China market.

The new regulatory regime for e-commerce which the pilot zones can take advantage of has brought down the barriers facing overseas sellers. The Chinese government has cut red tape for e-commerce compared with general trade, enabling faster delivery, and making it easier to serve the Chinese e-commerce market without having a registered presence or even a bank account in the country, thereby reducing the need for foreign firms to pay agents’ fees.

The zones build on the concept of bonded warehousing, whereby foreign firms can import goods in bulk and store them under the supervision of China’s customs authorities, to enable faster fulfilment of orders. E-commerce zones enjoy preferential tax rates, despite moves by the government in recent years to bring e-commerce taxation more in line with general trade. The government has also introduced streamlined customs procedures. A 24-hour customs clearance scheme for e-commerce imports was introduced in May 2015, and goods formerly subject to individual scrutiny can now be approved in bulk. The compulsory registration of products with China Inspection and Quarantine can take 12-18 months for general trade; for cross-border e-commerce it takes 4-6 weeks and is significantly cheaper.

Within the zones, logistics and financial services are available to handle deliveries and cross-border payments. According to the EU SME Centre, a European Union advisory service, this makes it relatively straightforward for an SME from another region such as Europe to fulfil an order from a customer anywhere in China within around five days, to manage and track the entire process online, and to receive payment via a “payment gateway”, which converts the money from renminbi into the home currency and transfers it on to the home bank account.

A new e-commerce law is being developed in China. The second draft, released for public consultation in November 2017, tightens certain consumer and intellectual property protections, and when introduced may help to build trust in Chinese e-commerce.

In the short- to-medium term, the benefits of China’s new e-commerce pilot zones look set to accrue mainly to businesses in mature economies in the West and Asia-Pacific. The top countries selling into China via Tmall Global in 2016 were Japan, the US, South Korea, Germany and Australia, according to CBNData and Tmall Global. E-commerce between Western Europe and China is becoming easier. The linkages between the Hangzhou and Kuala Lumpur digital hubs may boost trade along the Maritime Silk Road route, helped along by the majority stake that Alibaba Group holds in Lazada, the dominant e-commerce player in South-east Asia. But for SMEs in developing countries in regions such as Central Asia, South Asia and Africa, it is likely to take longer to gain access to China’s new e-commerce zones. Many of these SMEs face hurdles in opening a bank account in one of the internationally-tradeable currencies that are used on online trading platforms, or in accessing financial services at all. Many also have to deal with poor logistics infrastructure at the local level.

Some of the service providers which are supporting the spread of e-commerce in China are now also expanding abroad. WeChat Pay and AliPay, China’s leading e-payment service providers, are competing for overseas markets (although at present they are mainly targeting Chinese tourism abroad rather than e-commerce). China’s logistics providers are also going out: SF Express has air freight services covering countries in North, South and South-east Asia and the Middle East, as well as further afield. Chinese logistics providers and e-commerce platforms are expanding their range of services with a view to becoming one-stop shops for online imports and exports. Many of these firms have built up their business by finding ways to incorporate China’s rural and less-developed areas into e-commerce networks, making them well-suited to serving other developed countries. Their expansion will, over time, extend access to China’s e-commerce zones to more SMEs along the Belt and Road.